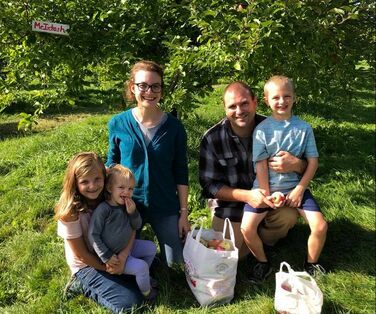 Chris and Kathleen had life all planned out. They    grew up in Sanbornton, NH, are high school sweethearts, and went to Plymouth State University together. Chris planned on researching in   meteorology, and  Kathleen was going to be a music teacher. Shortly after getting married in 2004, they began to feel God calling them to something different. Chris and Kathleen both attended Gordon-Conwell Theological Seminary in South Hamilton, MA and received their Masters of Divinity in May 2009. They were ordained together in July 2009. They have been serving  First Baptist Church of South Londonderry since February, 2010.

Fast-forward several years, and they are so thankful that God gave them new plans and brought them to South Londonderry. They love to ski and are fully convinced that maple syrup makes everything better.   In her free time Kathleen enjoys baking sourdough bread. Chris regularly forecasts locally as the West River Weather Guy. They have three children, Sarah, Daniel, and Priscilla.